The original walk has been temporarily closed during the construction of the Newtown bypass. Walking Newtown has an alternate walk instead, Walk 6a, below

This walk starts and ends in the centre of Newtown. It leads you out alongside the River Severn and its tributaries and includes some road and off-road walking. The walk returns through woods eventually skirting some industrial and residential areas to reach the town centre. The walk takes you around the western boundaries of Newtown.

1 This walk starts under the Town Clock at the junction of Broad St, High St and Severn St, the area known locally as ‘The Cross’. The building now housing Barclays Bank was erected by Sarah Brisco, a descendent of the Pryce family of Newtown Hall, to commemorate Queen Victoria’s Jubilee in 1897.   Opposite the clock on Severn Street is the Robert Owen Museum and the Robert Owen Memorial Rooms are over the HSBC on the other corner.  Robert Owen, the founder of the Co-operative Movement, is one of Newtown’s most famous sons.

Walk along Broad St towards Longbridge until you reach the bridge and the old woollen exchange on your left.  This building is now the Regent cinema, a night club and the Exchange pub.  After the woollen exchange and before the bridge turn immediately left onto the tarmac footpath.  This footpath looks over a lower footpath and the River Severn.  Stay on this higher footpath until you reach the footbridge over the river to Dolerw Park, where you switch to the lower path.  Continue on this path alongside the river.

2 Cross a small footbridge over a stream into the grassed area.  Leave the path here and walk along the river bank passing the new skate park and football pitches on your left.  Continue following the river on grass, fenced walkways behind housing, informal paths and some tarmac paths. Take the right fork on the tarmac footpath at the Vaynor Park information board (SO 949908).  After the path takes you through a second area of housing there are some steps which take you down to the river (SO 089909).  Follow the river to the left alongside more football pitches.  Look out for a path to the right (SO 088909) which takes you down to the water’s edge and on through woodland until you come to the tributary joining the river.  This is the Mochdre Brook and it prevents you from going further along the banks of the Severn.

3 Follow the footpath to the left at a fingerpost then bear right under the railway and through a pedestrian gate into the field.  Follow the hedge on the right until you come to another pedestrian gate.  Go through and bear left towards the road.   Go through another gate and cross the busy A489 road to Llanidloes and the west.  Pick up the footpath to the right of the parking area and follow it with the brook on your right over stiles, gates and small footbridges, alongside a pipeline running above ground for a time until you coming to a well signposted stile leading you through an area resembling a private back garden. A gate then leads you out to another stile onto the Stepaside Road (SO 088899).

4 Turn left, passing both ends of Glandulas Drive to just before the Fronlas Farm on your right.  As you approach the farm buildings there is a track going off to the right.  At the start of the track there is a pedestrian gate and fingerpost on the left.  Go through this gate and turn right to skirt the farm buildings, going through several gates following way markers.  Go through the field gate on to the farm track and turn right.  At an open gateway, turn left and go through a field gate.  Bear right to follow the fence around the wood until you come to another gate which leads you into the Castell y Dail garden with a pond, picnic area and herb garden.

5 Go through the gate on your left onto the road in front of the buildings of Castell y Dail. From Castell y Dail follow the road down into the start of the industrial estate.   Turn right then immediately right on to the main road, Heol Ashley.  Continue on this road, past Texplan until you pass the Emerson plant to reach Actia (Unit 81).  Turn left down to signed footpath.  Follow this until you see an opening on your right on to a gravel footpath.

6 Follow this up into the wood and then continue along the winding path through the wood, ignoring the occasional side paths.  When you come out of the wood into a field, turn left and go over a stile on to the road. Turn right and follow the road around to the left until you reach the T junction.  Turn right on to the bigger road, Plantation Lane.  Follow this road until you reach the High School on your left.  Take the pedestrian path between the school and the hedge.  This turns left to lead you parallel to the A483 Dolfor Road.

7 Here the path runs alongside a final, surprising bit of running water where the stream from Blackhill and Dolfor is briefly allowed up to see the light of day in a concrete culvert before being submerged again in subterranean pipes.  Go under the railway bridge, cross the A489 at the pedestrian crossing.  Turn right then immediately left into Park St.  Follow this past the library and then enter the park on your left to go past the Castle Mound.  Leave the park through the gates at New Church St.  Cross the street and continue ahead along High Street to return to the clock. 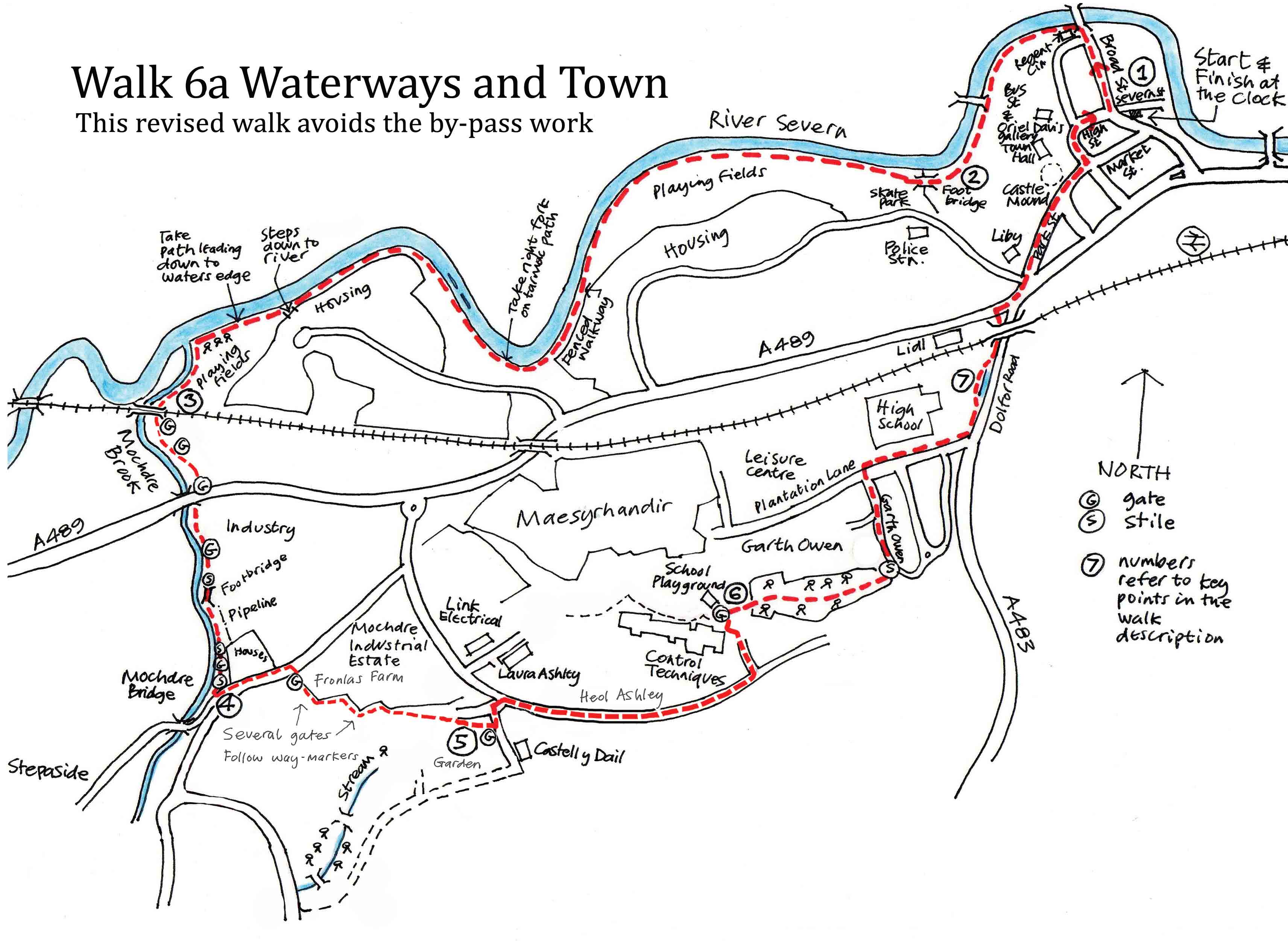