The River Severn Custodians have decided to tackle the invasive species, Giant Hogweed, that is growing in profusion along the Severn.  This plant is dangerous since the sap in contact with skin causes severe blistering when exposed to sunlight.  This first eradication event in June, 2012 and focussed on an infestation near the Mochdre Brook in an area used by local children.  Other events have followed regularly and we now tackle this nuisance annually.

Our efforts have resulted in a dramatic reduction in the number of these dangerous plants along our stretch of the river, especially in those areas where walkers and children could come in contact with them.

To learn how we tackle them, click on Notes on Hogweed control. 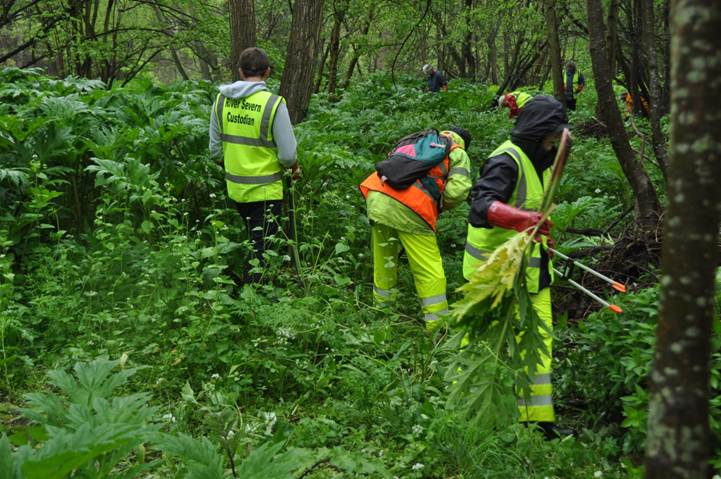 The Custodians have provided their survey data on the location of all three major invasive species to the Environment Agency (EA)/Natural Resources Wales. This has helped the government to carry out a limited chemical treatment programme tackling the Japanese Knotweed.  Japanese Knotweed can undermine the flood defences so it is targetted by the government. We will continue our battle against the Giant Hogweed since the EA do not have the resources to chemically treat either this invasive or the Himalayan Balsam.

We monitor but do not uproot Himalayan Balsam. Uprooting in large areas leaves too much exposed bank subject to erosion. Bees are very attracted to this species and it is a preferred food source for them when in flower. We clear paths through it in order to maintain access to the river and encourage people to eat the tasty flowers and seeds so minimise spreading. Here are some recipes for it.