Minutes of previous AGM
Minutes of the last AGM held on 20th March, 2014 were reviewed and accepted

Presentation of accounts
The annual accounts were presented by outgoing treasurer, Kath Wigley, and were accepted.  A copy of the accounts is appended. The remaining money from the Newtown Town Council grant, when spent, will need receipts submitted to the council. Peter Harris thanked Kath for the excellent work she has done as treasurer.

Annual report
Activities during 2014/15 were summarized by Mike Davies. These included presentations to local clubs, associations and schools publicizing the river as a community resource and the work being done by the Custodians.  We participated in both the Newtown Carnival and Food Festival.  The bird and bat boxes that we installed in Dolerw Park have been monitored and the bird boxes are being well used.  Control of Giant Hogweed has continued as and when required and the original infestation at Mochdre Brook seems to be contained and under control.  The Severn Rivers Trust has been chemically treating areas upstream of us but there is still a large area around Caersws that needs to be controlled. Mike will contact the Caersws Angling Club to see if we can help them with tackling this.

Current membership
There are currently 41 members on our circulation list, many of whom are inactive.  Mike will contact them to see if any of them plan to participate in any future activities, just wish to be kept informed or are no longer interested.

Survey Work
Paula Scott, our scientific officer, described the successful river use surveys that we carried out this year and also talked about the way that the group uses GPS equipment.  Other members may wish to be trained in this technique.

The river fly larvae survey has been ongoing, weather and river conditions permitting, and data is regularly posted to our web site and to the River Severn Trust.  Peter Thomas expressed an interest in being trained in this technique and Mike will send details of the next training session which will be held in Meifod.

Web Site and Blog
The RSC web site is being maintained and being regularly updated. Russ Edwards has established an excellent blog and Facebook presence but has been disappointed by the lack of participation from members. He is abandoning the upkeep of both media sites, but is willing to carry out "behind-the-scenes" updates to the Blog software for the time being.  Lisa Barlow offered to help with Facebook posting and this will be investigated.

River Protection and Clean up
Litter continues to be a problem, particularly in the area around Macdonalds car park.  Macdonalds staff do a local litter pick every morning but there is still litter blown from the car park on to the steep bank and on into the river.  We have discussed the possibility of installing a small fence along the crash barrier to prevent this.  Peter Harris will investigate what is needed to make this happen.

There was a long discussion on the ongoing problem of dog fouling on pavements and various methods of dealing with it, such as bag dispensers, notices, spray painting deposits, etc.  This will be considered further to see if any action plan can be developed.

Involvement of Young People
Attempts have been made to involve young people by presentations to schools and talks with bodies such as the Scouts.  Lisa reported that the Severn Rivers Trust had explored the possibility of funding more canoes for the Scouts which could be used for river survey work.  This was not possible but funding might be available for materials to make coracles.  Mike to send details of coracle making expert to Lisa.

All of the primary schools in Newtown are to participate in lantern making for the Art Project due to take place as part of the River Festival to take place on 16th October, 2015.  Lisa will be making visits to the schools in September and suggested that this will be an opportunity for the RSC to talk with the pupils.

We still have not been able to involve pupils from the High School.  Peter Harris will talk to staff there to see if we can generate some interest in becoming involved or, at least, aware of our activities.

Planned activities for 2015
Continuing survey work, particularly the river use survey, at days and times different to those covered previously.

The river walk still needs to be improved by dealing with the steep bank.  PCC Footpath Officer is planning to use contractors to undertake this work and will be contacted to see if there is a scheduled date for this.  This walk, and others developed by the Walking Newtown group, are being opened up, recorded and will be posted on the Town Council web site and printed copies made available.

We intend to participate in the Newtown Carnival in June, the Newtown Food Festival -5/6th September and the Newtown River Festival in October, assuming that we can get sufficient members willing and able to help.   There is a meeting to discuss the Food Festival on 17th March which will be attended by various members.

Election of committee
Russ Edwards and Joan Avery do not wish to remain on the committee, the rest of the committee was unanimously reelected.  Tilde Mans wished to join the committee and was elected, gratefully.  We still need a treasurer and Peter Harris will talk with a possible candidate.

Any other business
Lisa is considering setting up a regular work programme for such activities as river and nature surveys, mapping, tackling invasive species, etc and will involve RSC members.
Sue Newham gave an update on some of the Newtown Town Council activities relevant to our group.  She has proposed to the town council that they ask Dingle Garden Centre to take cuttings of the black poplar to propagate for future use.  The Custodians can then be involved in finding suitable sites for establishing cuttings.
The Council has purchased 4 picnic benches which will be installed at the Gravel Car Park
They are also planning to lease 2 Big Belly Bins which requires a 5 year lease.  These bins are very effective at preventing blowing litter and need far less frequent emptying. The Council has agreed 1 year lease so far and will try to arrange for the required 5 years.  One of these bins will go in the car park and the other one at the bottom of slope near Macdonalds.
The Council has also purchased finger posts to show walking routes around the town. 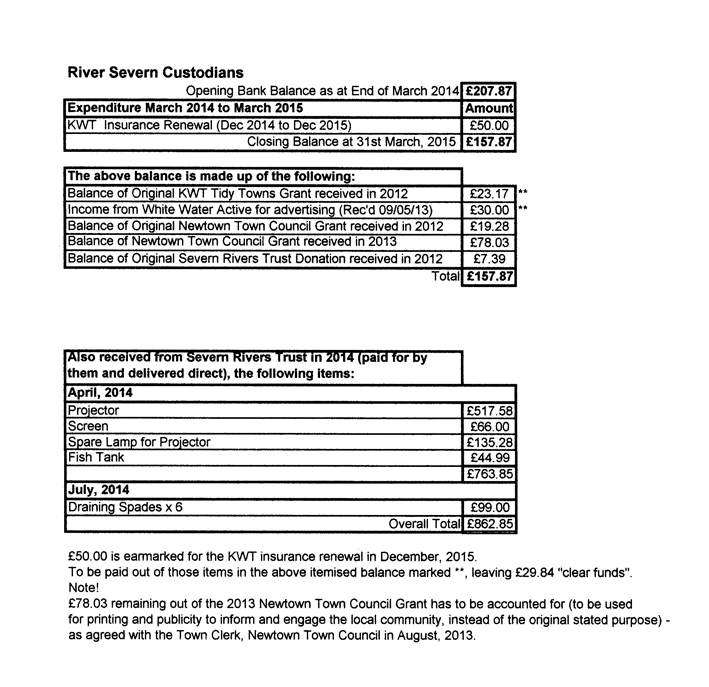